BLOCK THE BOAT VICTORY IN OAKLAND!

In 2014, the Arab Resource and Organizing Center (AROC) led #BlocktheBoat, the longest blockade of Israeli ZIM ships in history. ZIM is apartheid Israel’s largest and oldest cargo shipping company. This action was successful because of the leadership of Palestinian organizers, and the powerful solidarity from International Longshore and Warehouse Union (ILWU) Local 10 port workers. ZIM ships have not returned to Oakland since.

Today, as apartheid Israel has once again waged immense violence and destruction on the Palestinian population that has prompted unprecedented worldwide resistance and solidarity, we have learned that ZIM-operated ships are attempting to return to Oakland this month for the first time since 2014.

We are calling on communities across the Bay Area to be ready to mobilize to the Port of Oakland to #BlockTheBoat again, and communities across the world to join in solidarity by building relationships with your local unions, raising awareness about Block the Boat, and amplifying the call for BDS and worker solidarity from the Palestinian workers in Gaza.. We will again send the message that racism, and apartheid-profiteering will not be welcome anywhere.

Read the appeal from the Workers Unions in Palestine 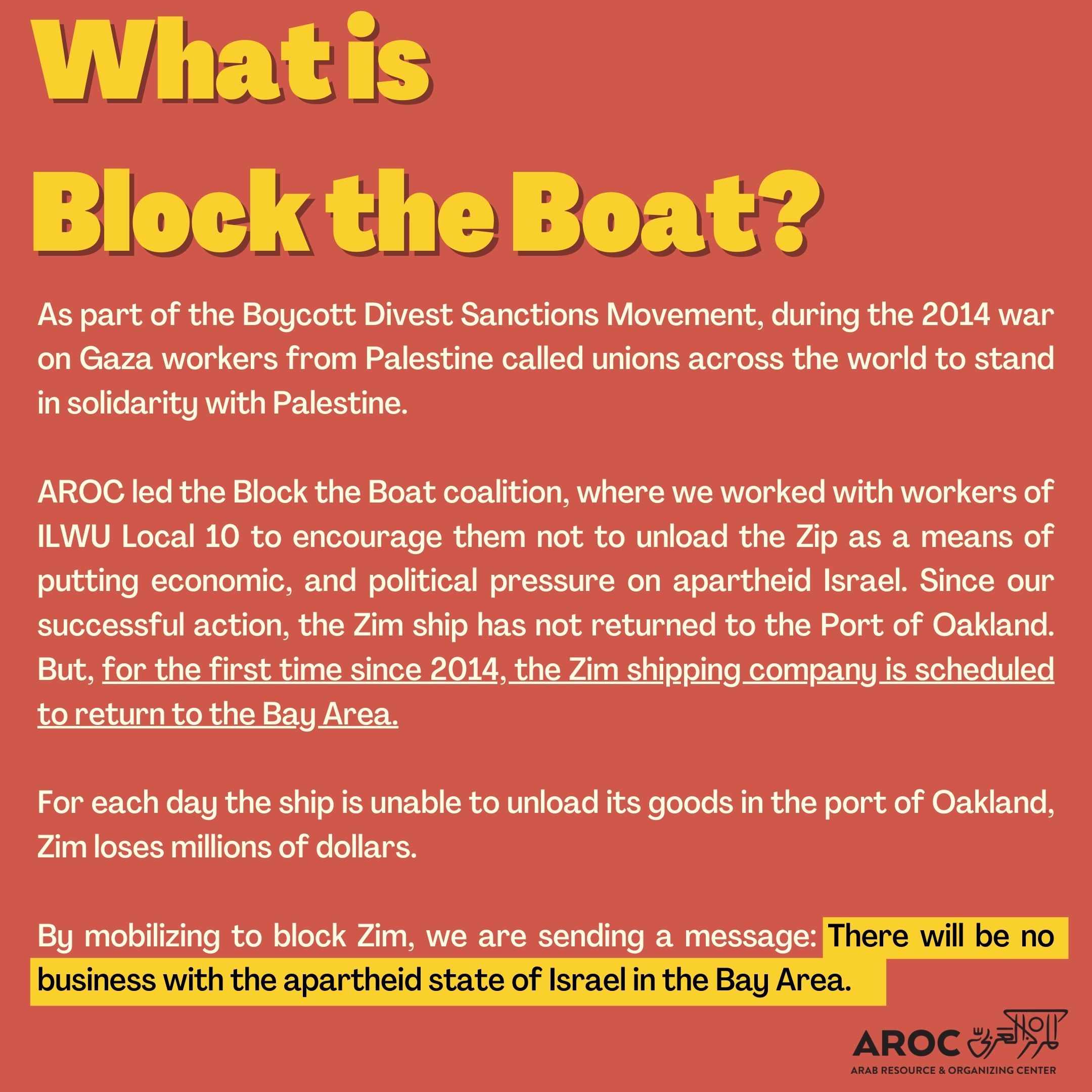 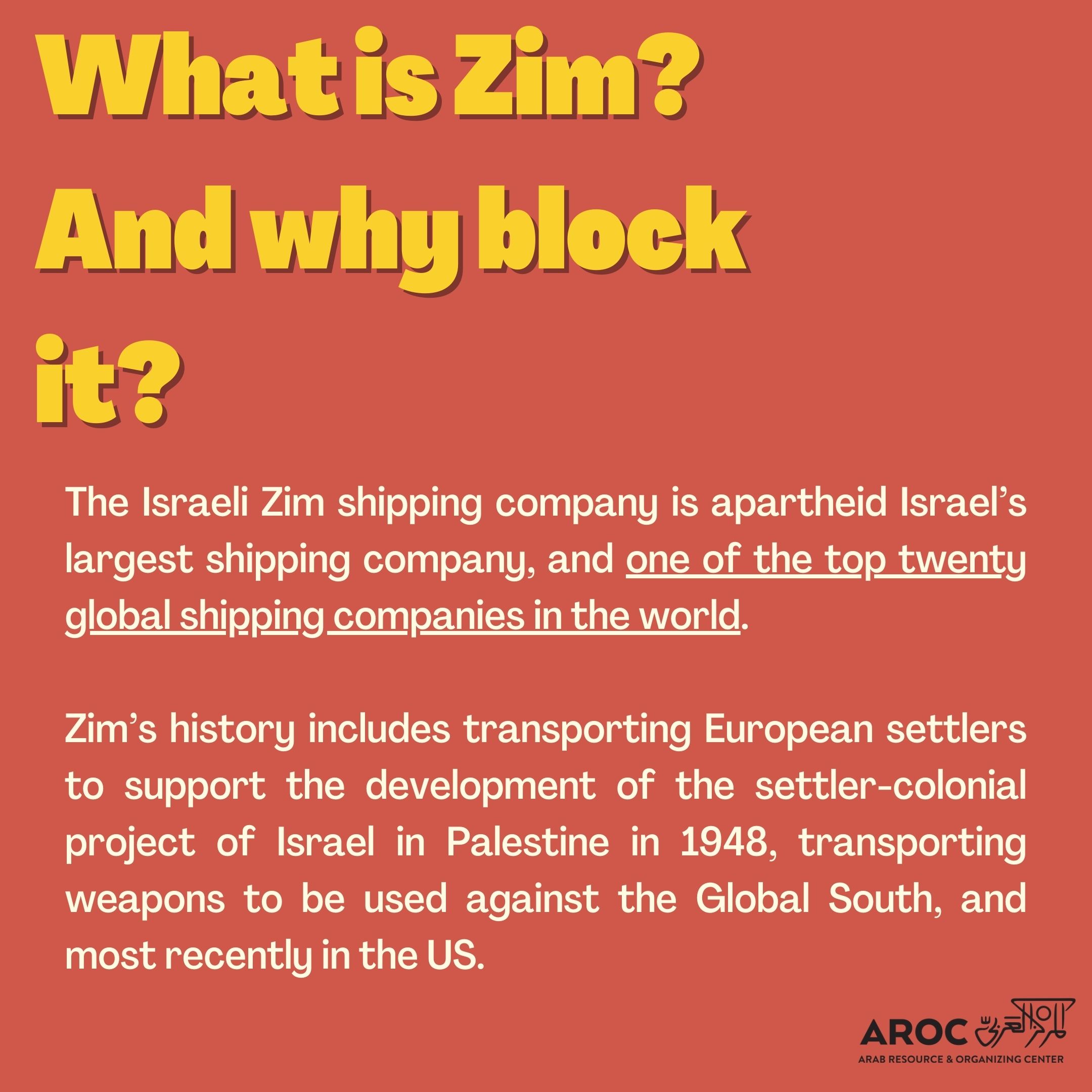 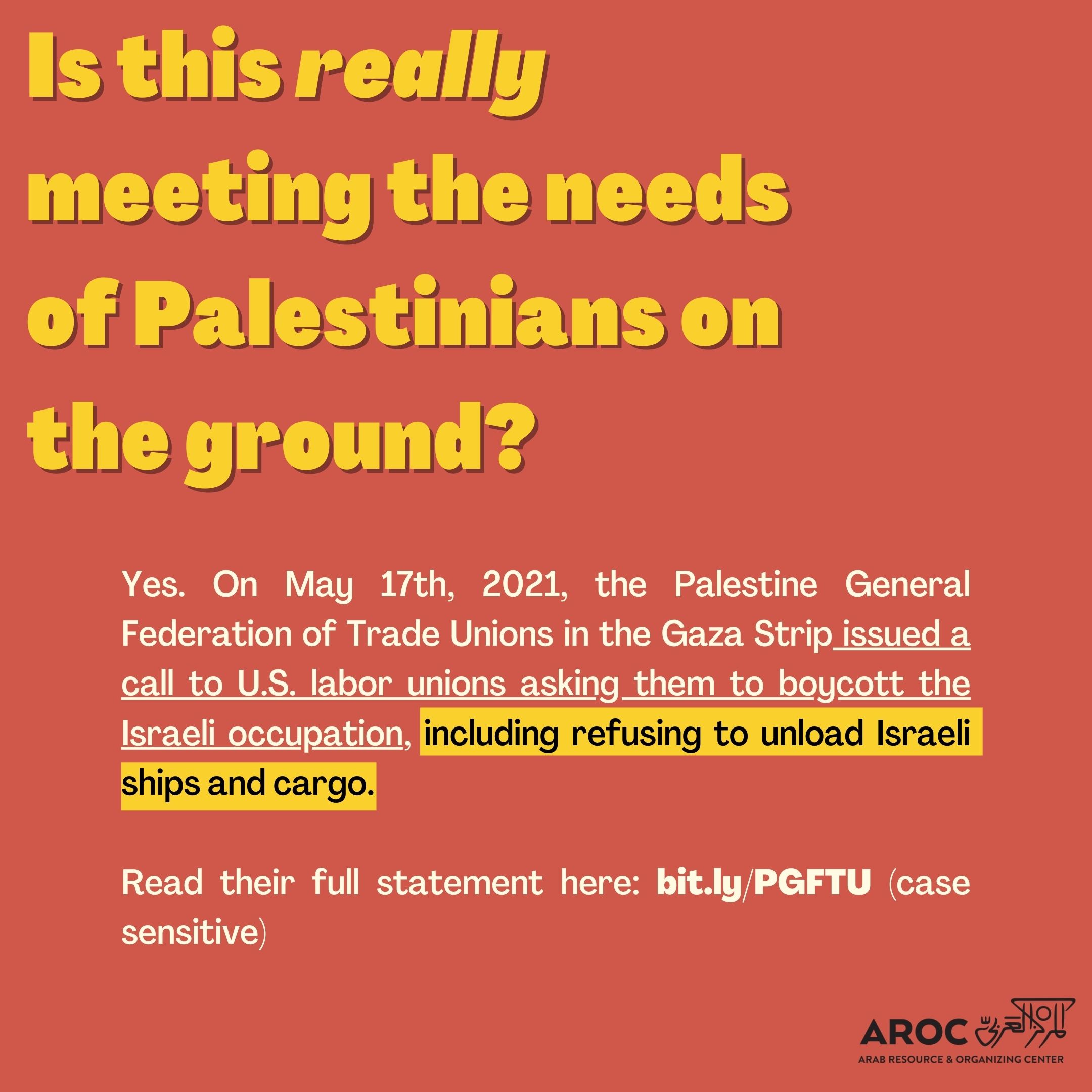 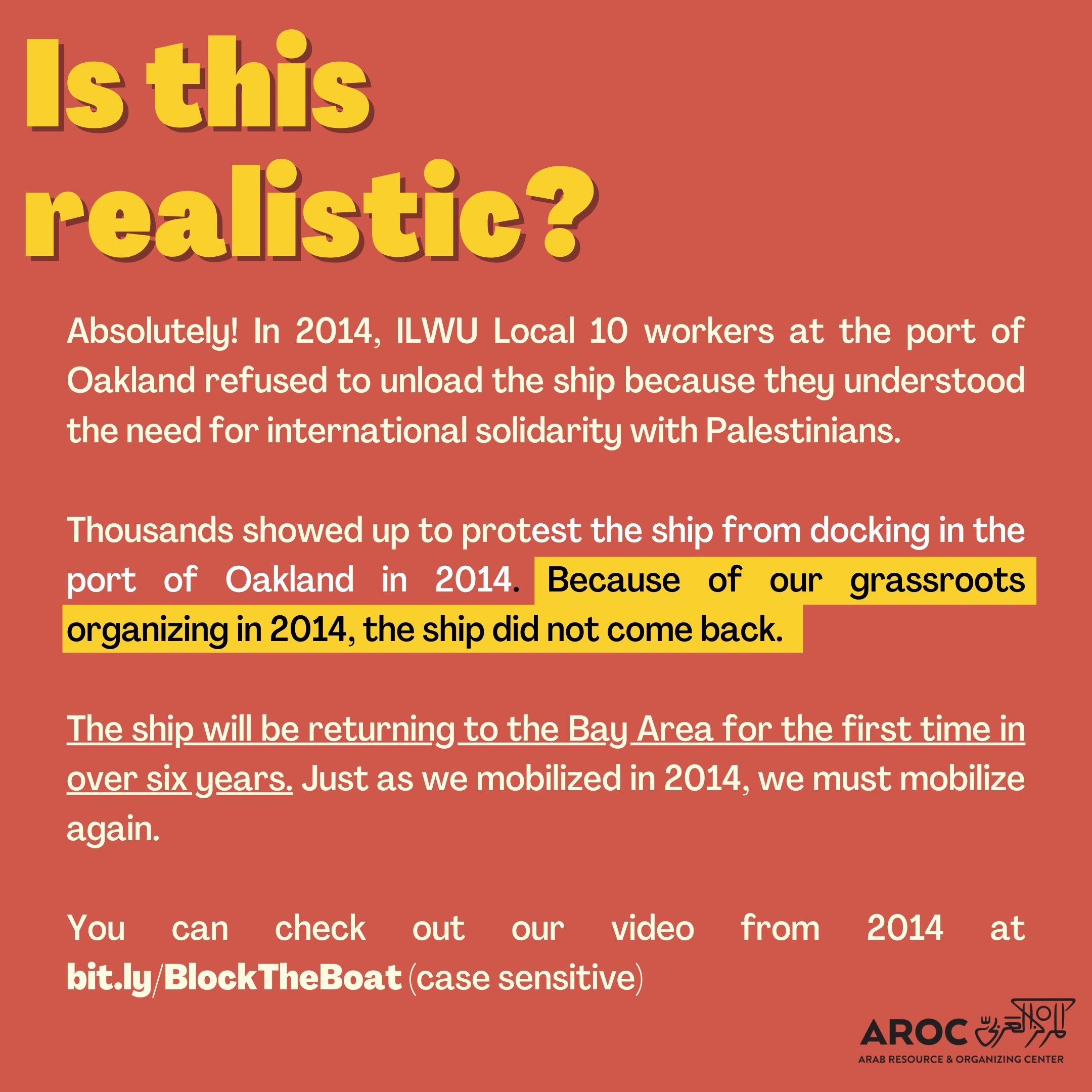 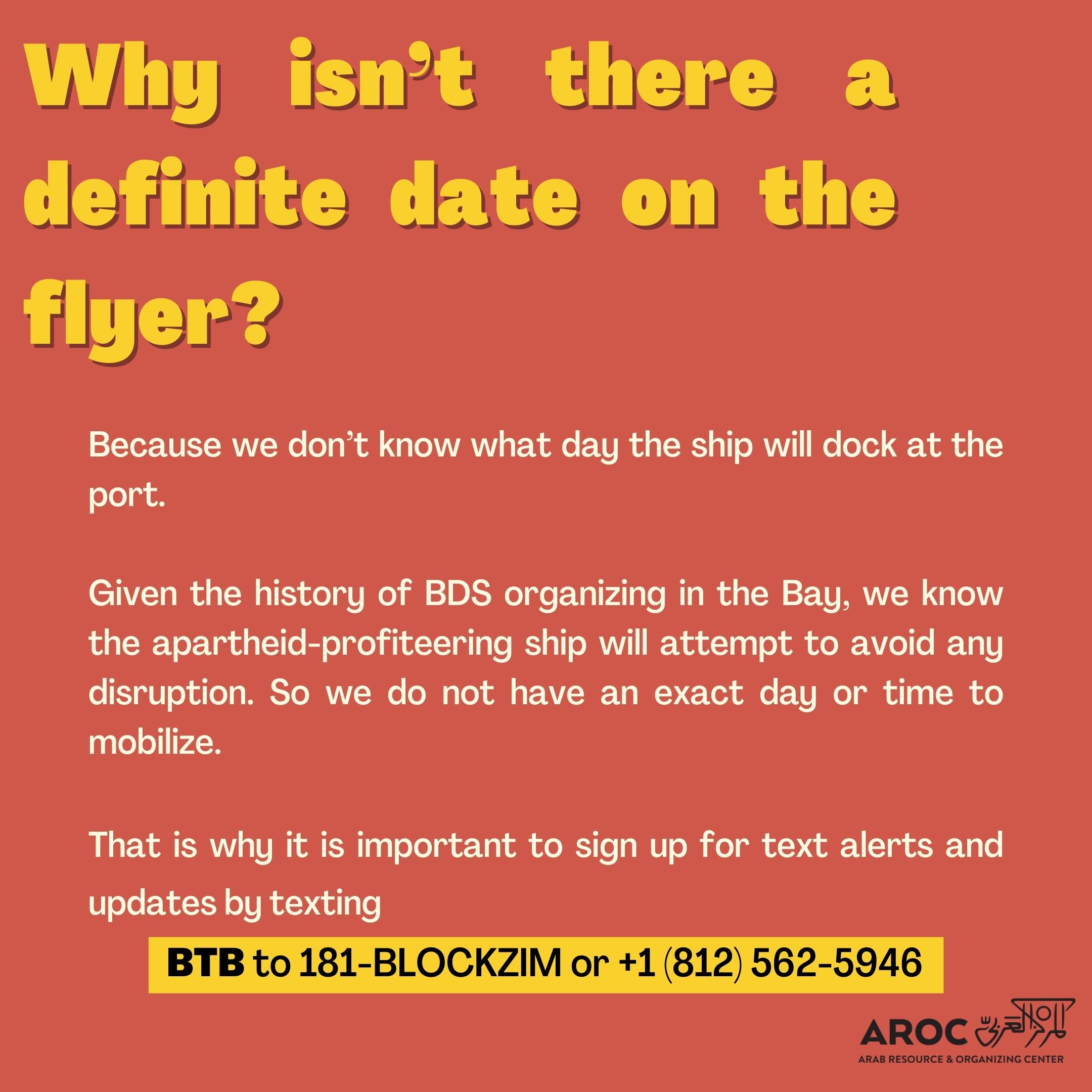 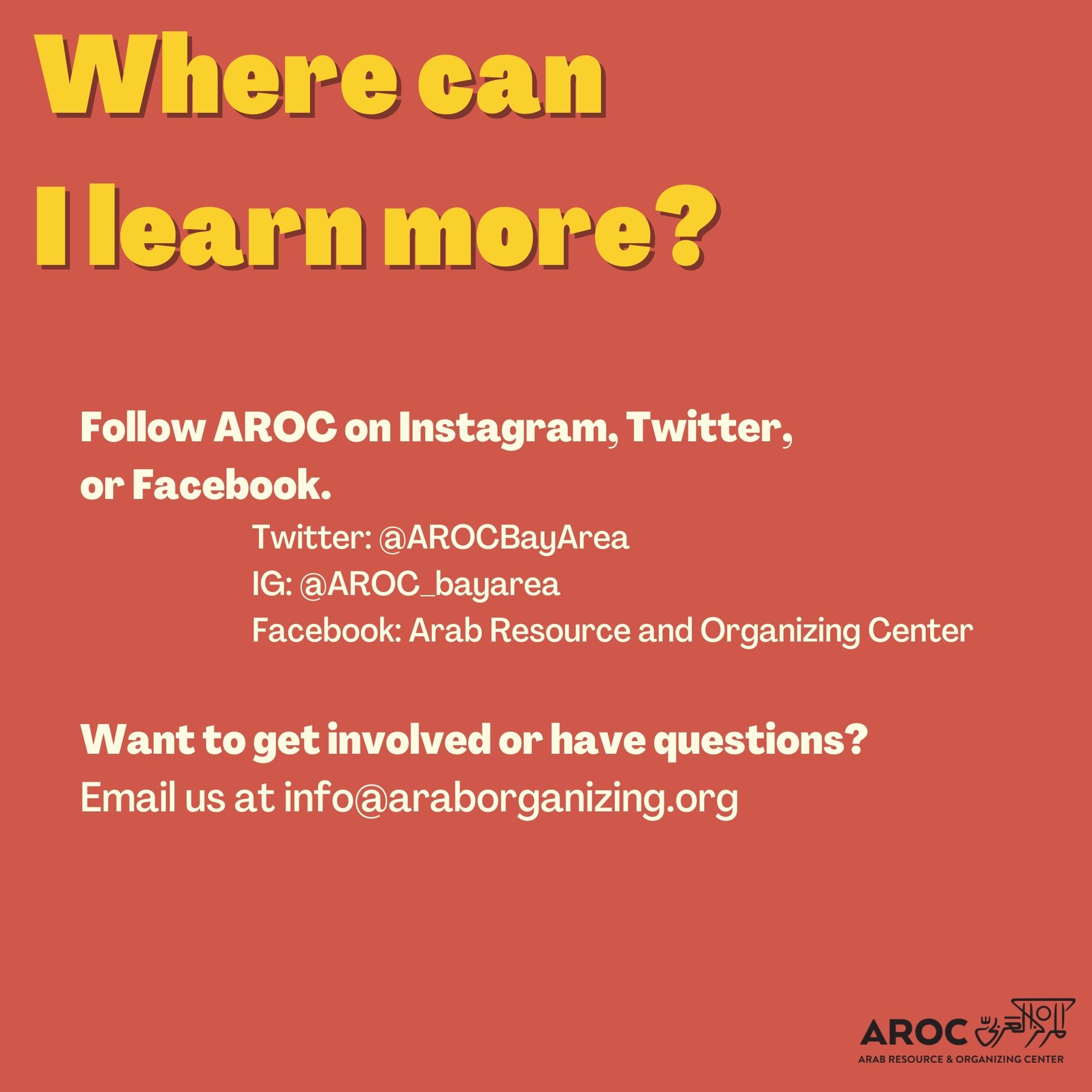 Contact us for more information or to get involved

Serving & organizing Arabs & Muslims to fight for the liberation & dignity of all oppressed people. | Resisting state violence from here to our homelands. #BDS

ACTION ALERT: The San Francisco Board of Education Reverses Their Decision on the Eid Holiday!

Use our one-click tool to send a message to the SF Board of Education to demand they implement the Eid holiday in the upcoming school year! Use the link http://bit.ly/DefendEid

"Now more than ever we must learn from our history and ensure that we do not replicate harmful policies to further the criminalization and violence of Black, Brown and Indigenous communities." - Lara Kiswani, @AROCBayArea

Tell the American Bar Association (@ABAesq): Controversial IHRA definition that targets advocacy for Palestinian rights should have no part in resolution on antisemitism! #RejectIHRA

BREAKING (1/3) 🇧🇷 Bolsonaristas are leading a violent insurrection in the capital Brasilia, ransacking their way to the Congress, Supreme Court, and Presidential Palace. The @ProgIntl stands with @LulaOficial against these acts of terror and in defense of democracy in Brazil.

A thread on something deeply disturbing:

The dean of the @Harvard @Kennedy_School -- Douglas Elmendorf -- has blocked a human rights fellowship for @KenRoth, the former executive director of Human Rights Watch @HRW.